A via ferrata (Italian for “iron road”, plural vie ferrate or in English via ferratas) is a protected climbing route found in the Alps and certain other locations. The essence of a modern via ferrata is a steel cable which runs along the route and is periodically (every 3 to 10 metres (9.8 to 32.8 ft)) fixed to the rock. Using a via ferrata kit, climbers can secure themselves to the cable, limiting any fall. The cable can also be used as aid to climbing, and additional climbing aids, such as iron rungs (stemples), pegs, carved steps and even ladders and bridges are often provided. Thus via ferratas allow otherwise dangerous routes to be undertaken without the risks associated with unprotected scrambling and climbing or the need for climbing equipment such as ropes. They offer the relatively inexperienced a means of enjoying dramatic positions and accessing difficult peaks, normally the preserve of the serious mountaineer; although, as there is a need for some equipment, a good head of heights and basic technique, the via ferrata can be seen as a distinct step up from ordinary mountain walking. Conversely, the modest equipment requirements, ability to do them solo, and potential to cover a lot of ground, mean that via ferratas can also appeal to more experienced climbers.

The origins of the via ferrata date back to the nineteenth century, but they are strongly associated with the First World War, when several were built in the Dolomite mountain region of Italy to aid the movement of troops. Many more have been developed in recent years, as their popularity has grown and the tourism benefits have been recognised. Over 1000 via ferratas now exist. The majority are found in the Alps, most notably in Italy and Austria. Others are found in a number of European countries, and a few places elsewhere. Via ferratas have traditionally been associated with limestone mountain regions, notably the Dolomites and the Northern Limestone Alps, steep nature of the terrain creates the need for some form of protected paths, while the presence of ledges and natural weaknesses means relatively easy but rewarding routes can often be created. However, they are now found in a range of different terrains.

The term “via ferrata” is used in most countries and languages, except notably in German-speaking countries which use Klettersteig (German for “climbing path”), plural Klettersteige.

The first via ferratas in France were constructed in 1988; by 2003 there were 100.[5] While high mountain via ferratas have continued to be developed, the modern era has seen the rise of more “sporting” routes, sometimes closer to the valley and often more challenging in nature, with severely steep sections and requiring high strength. Routes have been built in new dramatic new locations, alongside waterfalls or in canyons. Other new routes include features such as wire bridges and even zip wires, designed to increase their appeal to visitors. Climbing via ferratas has come to be recognised as a valid mountain activity in own right, with its own guidebooks, equipment, grading system and enthusiasts.

VIAS FERRATAS IN THE WORLD

Via ferratas have continued to grow in popularity. In the 1970s and 80s development remained focused on traditional areas (the Dolomites and Northern Limestone Alps). New routes were mostly developed by the climbing community often with active involvement of one of the relevant Alpine Clubs (although there was occasional controversy and opposition to some new routes). In the 1990s and 2000s, development became more commercial and involved more organisations: via ferratas began to be seen as a useful way to encourage tourism and increase the range of activities available to visitors, and so new routes were developed by local communities, outdoor activity centres, cable car companies, mountain refuges and others, as well as continuing involvement by the Alpine clubs. Development of via ferratas has spread out of its original areas to the rest of the Alps and beyond.

VIA FERRATA ALMOST FOR ANYONE

Via ferratas can vary in length from short routes taking less than an hour, to long, demanding alpine routes covering significant distance and altitude (1,000 metres (3,300 ft) or more of ascent), and taking eight or more hours to complete. In certain areas, such as the Brenta Dolomites it is possible to link via ferratas together, staying overnight in mountain refuges, and so undertake extensive multi-day climbing tours at high altitude. In difficulty, via ferratas can range from routes that are little more than paths, albeit in dramatic and exposed situations, to very steep and strenuous routes, overhanging in parts, demanding the strength—if not the technique—of serious rock climbing. Generally, via ferratas are done in ascent, although it is possible to descend them.

Development of the via ferrata in Mexico is just beginning, the first Via Ferrata of the country was installed near the city of Monterrey in the year 2007 conducted by the team Ecoprojects and company GEO Aventura. Today there are only 3 Via Ferrata routes in the country, Vertigo Route NL, via ferrata Piedra Volada in Chihuahua and Via Ferrata Mineral del Chico in Hidalgo. 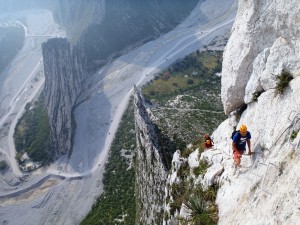